A reading and commentary on the Book of Revelation.

The Revelation is an attempted philosophic study of the last book of the Bible, intending to help those who seriously want to read the book. After collecting the pertinent points from elsewhere in the scripture, and some of the best thought of readers throughout history,  we proceed line by line through the text. Chapter One, available for free, is a study of the life of St. John and a demonstration of why he does seem to be the author of the last book of the Bible. The book is 377 pages. It is accessible though the Menu above, as of March  2018, in four parts, and then as a whole.

The Revelation: A Reading of the Vision and Letter of John to …

https://www.barnesandnoble.com › Books
Jun 22, 2021 — Discover The Revelation: A Reading of the Vision and Letter of John to the Churches by Mark A. McDonald … Publisher: Virtualbookworm.com.

Chapter One: That it is indeed John the Apostle Who Wrote the Revelation

Part One: The First Half of the Revelation

Part Two: The Second Half of the Revelation

A copyright version is in the Library of Congress, at least as an e-book.

Now for a book cover, this has been written, and I will edit it here, since the improvisation version has a couple errors:

This commentary is a reading rather than a thesis, though certain teachings can be described: that John is indeed the author of the Revelation; that it is addressed to those already Christian, or is not evangelical; that it is about the martyrs, and its purpose is the penance of the Church; that the study of Twentieth Century Totalitarianism is crucial- and politics and scripture are here joined in a new way; that the time may indeed be quite “soon,” and that we are in the time between the return of Israel and the appearance of the false prophet; that Jewish and Christian readings together are necessary; that there will not be a second nativity, but Chapter 12 refers to a comprehensive, not sequential, occurrence; that the two witnesses are the Eastern and Western churches, and these are paradoxically also the legs of the statue in Daniel; that the rapture is not known to be before these things of the tribulation; that it is written to the church, not only those left behind; that what is foretold is a persecution similar to that in WWII; that it is a key that the beast will hate the harlot; that there are plural nations with the Kingdom; that the Bride includes redeemed mankind, and the tree of life, in the beginning middle and end of scripture, is wisdom.

Then for the author bio, I have:

The author taught courses in American government at a community college and philosophy at St. Mary’s of Orchard Lake, in Michigan. He studied psychology and philosophy at Grand Valley before entering the program of politics and literature at the University of Dallas. He is known for the suggestion that psychology follow the Socratic turn, away from the pre-Socratic basis of our current science of the soul. His dissertation, on Shakespeare as a political philosopher, is published as a book: Shakespeare’s King Lear with the Tempest: The Discovery of Nature and the Recovery of Classical Natural Right. He has also published a long journal article, “On Hamlet and the Reformation.”

P. S. I am glad this was written before the 2016 election disaster, and very little has changed, as we should not seek to profit by apocalyptic fear, but to read the book, which is very difficult! 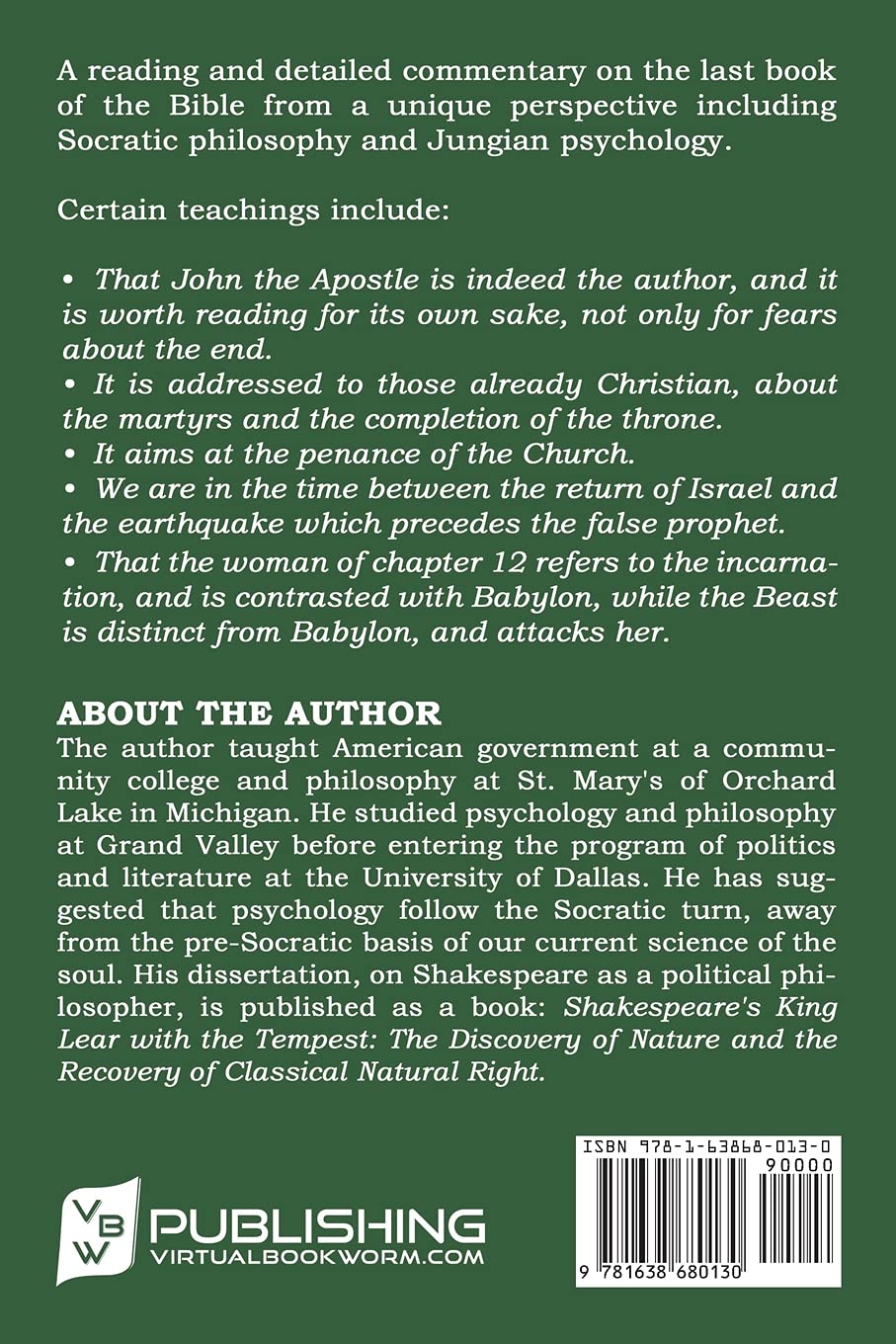